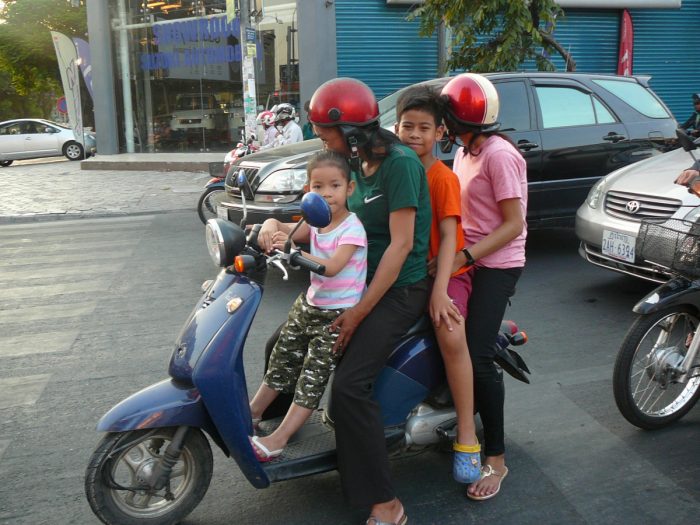 National Highway No. 6 – A street changes its „appearance“

It´s easy to get a ride on one of the small buses (a sort of collective transport) that go to Phnom Penh, because all National Highways begin and end in the capital of Cambodia. And it´s a very special highway: sometimes motorbikes drive on the wrong side for a short while, or pedestrians or mopeds with overloaded trailers use the side-track.

To get to Phnom Penh you just stand on the side-track of the highway and give a hand signal as soon as you see a minibus in the distance. To be on the safe side as a foreigner you ask “Phnom Penh?” and show 5 fingers for the 5,000 riel that a one way trip should cost. All who know Khmer language have a great advantage: they can just ask!

Last Saturday I was lucky. We were only 5 passengers and I had a whole row of seats just for me alone. A privilege, no one has on the way back. Back to Khemara Kidshelp School you everybody sits tightly squeezed: 4 persons per row plus their luggage. Officially there are only 3 seats per row!

National Highway No. 6 runs alongside the Mekong River, that´s why the landscape on both sides of the highway is so green even though we currently are in the dry season.

You will see large banana plantations, in some places also rice fields. The green is interrupted by the numerous small and large temples with their pagodas. Many shine in the sun, others are made of gray material. But I do not know why some temple complexes seem to be much wealthier than others.

A few meters away from the road are fields and sometimes small lakes. There ducks are bred, fish caught and crayfish, snails and little shells collected in the small irrigation channels that originate from these lakes.

Just once so far we could observe a man in one of these channels using very improvised diving equipment made of a small water tank and a garden hose. Unfortunately we couldn´t see what he had caught or if he caught anything at all.

In the morning, Buddhist monks all dressed in orange are on their way, often with a color-coordinated umbrella, walking or sitting on the back of a moped or motorbike or in a Tuk Tuk to collect donations, especially food. They have to eat before noon, because after 12 o´clock they have to fast until the early morning of the following day. All the food they didn´t eat will be given to the poor in the temple.

Apart from the temples, another very impressing things are the traditional Khmer houses which are built on stilts. Depending on the wealth of its inhabitants, the roofs are made of palm leaves or red and sometimes blue tiles. The walls are made of braided palm leaves or wood.

It is a pity that these stilt houses only “survived” in the country side, even though most Cambodian people are convinced that living in them is much healthier than living on the ground floor.

And the area under the “real” house serves as bedroom when it is very hot and is being used as parking or storing space and much more.

Along the highway, changes are visible everywhere. Nowadays you can see more and more residential buildings constructed with stone and cement along the road, which apparently reflect the wealth of its owners.

During the first 10 to 15 km of the 36 km long route to Phnom Penh (starting at KKS) the stilt houses that stand alone, with some distance to their neighbors, still dominate. But you´ll already begin to see more and more stone houses which at that point rarely have more than 2 floors.

But with every kilometre that one approaches the capital, the streetscape becomes more industrial first, with small factories, large storage halls and warehouses and then the “modern” housing estates appear, built for the middle class (I don´t know if the upper classes also move to these housing estates). All of them with a sensational oversized entrance gate and with very poetical names like “Botanic City”, “Living with Nature” (although nature had to be destroyed to build these housing estates!!!) and other names that I can´t always decipher when passing them. Most of these housing estates consist of densely constructed terraced houses whose design is rather unimaginative. – but all of them have got a parking space.

And among all those housing estates and factories and warehouses there are still many colourful smaller and bigger local markets where mostly women buy and sell their wares. Many of them are still dressed in pyjamas, but nobody cares because it seems “normal”, even in the capital.

The products on offer in these markets are manifold: Fruit, vegetables, small shells and snails that are offered everywhere. You also could buy fish and meat; all dead (yet sometimes still alive) animals are waiting for a buyer, laying on the simple wooden table or hanging from a hook. Neither fish nor  the meat is chilled (most of the time), and I´m sure it doesn´t get tastier or healthier in the sunshine with temperatures of more than 36° C!

Depending on the size of the markets, the range of products on offer can be much bigger and include textiles, household appliances made from plastic and much more.

The traffic increases and from one moment to the other you won´t know if you are still in the suburbs or if you have already reached the capital.

The pre-programmed traffic jam begins hundreds of meter before reaching the so-called „Japanese Bridge”, which must be crossed to reach the capital and its historical centre. The original bridge has got 8 tracks, out of which 4 are being renovated right now.

The result: motorcyclists practice queue jumping, ignoring the track on the ride side, which is actually assigned to them. Only very few Tuk-tuk drivers imitate them.

Sometimes there is a detour on kilometre 5, before reaching the Japanese Bridge. The reason for this being that “free passage” is organized for an important politician or functionary (or someone who thinks he should be included in these categories) or a “high level visitor” from another country.

No one organizing these detours cares about the hundreds of thousands that will be late for work or other appointments. It seems that hierarchical social and political structures and relationships are more important.