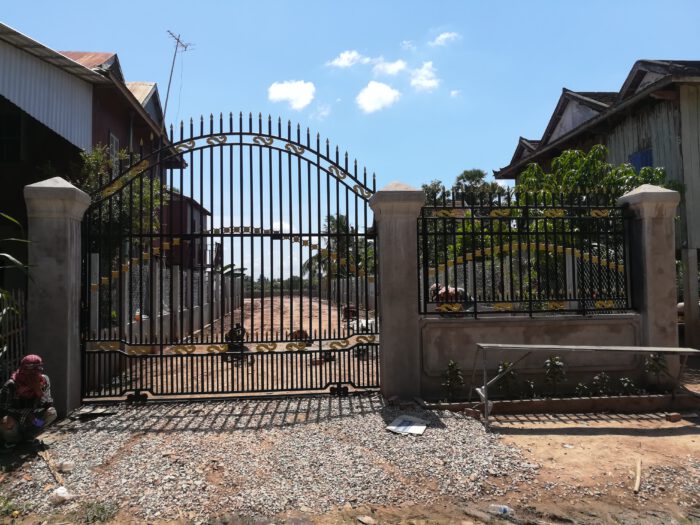 It is probably no understatement to say that 2020 is quite a difficult year. But we do not want to discuss the pandemic and its consequences for Cambodia again at this point. We have already done this elsewhere. But we do, once again want to point out how delighted we are that you are still donating for the new school! Every time we receive a notification that someone has made a donation, it gives us great joy and encouragement for the future! Many thanks to all of you!

But now without further ado to the current state of affairs:

As you know from the previous articles, the first phase of the project included preparing and levelling out the plot, constructing an outer retaining wall and preparing the construction drawings. As you can see on the photos, a lot has happened on the construction site during the last weeks. After the completion of the wall, a total of 150 truckloads of earth were piled up and evenly distributed on the plot. A few days after the soil was put in, the employees of a local metal construction company put up almost 160 metres of wire mesh as part of the upper wall and welded and installed the school gate. They had made the fencing by hand from about 300 kilograms of wire. Aside from being able to save money, working with local companies and the products manufactured by them, comes with a number of advantages. We get to support the local economy during what has become a global recession and that can potentially lead to an even better perception of our work within the village. This may sound trivial but can become very important, especially in the long run. We want to build good relations with our neighbours and the people in the village right from the start. On building sites (all over the world) theft and vandalism are a recurring problem. The probability of such a thing happening is much lower if the local community is behind the school project and everyone keeps an eye on the construction. Whenever there is work that does not require special training, the first people we ask to help us in return for a fair hourly wage, are the neighbours and day labourers in the village. We are confident that this approach will build good long-term relationships with our neighbours.

With today’s update on the progress of the project, we are also updating the total cost on the BetterPlace platform. The prices for the construction of the wall and the groundworks that we listed at the beginning of the fundraising campaign were based on estimates of the craftsmen and entrepreneurs who ultimately carried out these works. If you have previously carried out building work, you will know that the actual prices and quantities required can sometimes differ significantly from the first estimates. There can be many reasons for the differences. In the first quote from the bricklayers, for example, the costs for installing a water connection and the tap water that would be needed for the construction of the wall had been forgotten (a total of USD 54). In addition, the craftsmen have so far consumed drinking water worth USD 30 which was not included in the original quote. But not everything was more expensive in the end. Because the price of bricks decreased in between the time of the first estimate and the beginning of the construction of the wall, the cost of the bricks was USD 150 lower than estimated. One ton of cement was originally estimated to cost USD 100. Since we bought large quantities, we were ultimately able to negotiate the price down to USD 98 per ton. That sounds like little, but with a total of 15 tons of cement used, we saved exactly the amount of money we ended up spending on drinking water.

The additional costs to date amount to USD 1915.50, which is an increase of 14% compared to our first estimate. The main reason for the discrepancy was the builders had miscalculated the amount of earth required to raise and level the land. They had clearly underestimated how much the property slopes down from the road to its rear side (see Figure 3). The first estimate listed a need for 70 truckloads. To ensure that everything was at ground level and slightly above the level of the adjacent road before the rainy season began (so that the property would not be flooded), we ended up pouring a total of 150 truckloads onto the plot. The cost of the landfill amounted to USD 2850, instead of the originally estimated USD 1400. We successfully asked them to reduce the price by one dollar per load due to the high quantity we purchased. We are obviously disappointed by the poor miscalculation and will take action to ensure we get more accurate quotes in the future.

In the course of the first project phase it became increasingly clear that we need to bring onboard a professional project manager. Someone who plans and supervises construction projects on a full-time basis and who would support us with professional guidance at every future step of the project. We are convinced that the sums saved through professional advice will ultimately offset or exceed the expenses for the salary of such a manager. We are therefore pleased to announce that going forward, ExaPro, will take over the professional project management. ExaPro are a company with 25 years of experience implementing infrastructure and construction projects in Cambodia.

So, what will happen next?

In the coming weeks, we will take all the steps necessary to produce the final construction drawings. Our very own scholarship student Sovann was already kind enough to develop 3D designs of the school in late 2019 based to our initial ideas. During the visit of the Kidshelp Chairperson in January 2020, we were able to discuss further details and what we wanted Sovann to change. The 3D model shown in this article is the result of those discussions. It is incredibly motivating for us to see that one of our own students has created this design.

Using the model developed by Sovann as a baseline, an engineer/architect will produce exact construction drawings for the school building within the next few weeks. These drawings will include the exact design for the school’s foundation, plans for water and power lines, specifications of the materials and quantities used and the measurements and sizes for all elements of the construction. To be able to create all these, a so-called soil test report (STR) must first be prepared. In the course of this test, boreholes are drilled to a depth of around 20 metres, which are used to determine the stratification of the soil and ultimately the weight bearing capacity of the different layers. Only once all tests are completed and internal construction details agreed, can the detail designs be completed.

As soon as all details have been clarified and the construction drawings have been prepared, the engineer/architect can give us an accurate estimate of the total cost for the construction of the school building. The latter is key for us right now as it will determine the direction of our fundraising efforts. While we will continue to raise funds through the established channels (crowdfunding and direct donations) to make up for the cost that we already incurred, we hope to secure a big chunk of the funding for the school building and its interior from one single donor. E.g. from a foundation or through a government aid program that seeks to support education in developing countries. Since these aid programs and funds usually specify the minimum and maximum funding amount, the preparation of detailed construction drawings and the subsequent cost estimate for the school building is our top priority right now.

With this post, we are adjusting the project cost at BetterPlace to reflect the increased expenses as described above. Apologies for this long read but we are convinced that transparency and the provision of insights into the project progress will enable us to convince you to continue to support the project in the future and to keep on advertising for it. If you have any questions about the new school or ideas for fundraising, just write to us.