To give you insight into the lives and problems of the people of Cambodia, we have put together some information.

Most of the people in Cambodia are Farmers and Fishermen, while there is a lack of well trained professionals, a result of the intellectual persecution during the terror regime of the Khmer Rouge, even the darkest chapter in the history of the country.

Most of the families provides for themselves, the small surplus are sold. It is hardly possible to survive with this low income. That is why many people went to the capital, Phnom Penh, with the hope for better living conditions there. In most cases, this hope is disappointed, and there remains only the life without money, without electricity and water and poor hygienic conditions in confined spaces in poor settlements in the suburbs or in the surrounding villages.

“There is no social assurance or any public welfare system. In their desparation, many people see the last resort in the sale of their children, who then are forced into child labor oder even prostitution. For people (including children), who are not able to work, the only chance to survive ist to beg.”
(Quote of Constanze Burkhardt).

Child labor is another major problem, but nearly commonly accepted in Cambodia. This means that children not only suffer from early physical damages, but also receive no education. Also child prostitution – caused by distress or coercion – is a huge problem. In most cases orphans are sold by unscrupulous child traffickers to brothels, which are most visited by foreign tourists.

Cambodia is affected by heavy monsoon rains and floods each year. Thus, in 2002 most of the rice harvest was destroyed the third time in a row. More than 60 villages along Mekong River were destroyed, several hundred people were killed.
The other extreme occured in 2005, when the monsoon failed almost entirely. Many thousand people were hit by drought and hunger.

Things like clean water, food, electricity, schools and medical care, which we take for granted, are simply luxury for many people in Cambodia. For some people a distance of 15 kilometres to the next water well is bitter reality, even for too many people the lack of housing.

If you want to learn more about the country of Cambodia or its history, we recommend the article in Wikipedia. 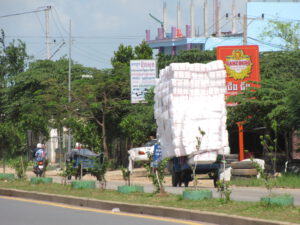 Religion
93% buddhists
6% muslims
1% christians
and others